You Will Meet a Tall Dark Stranger (2010, Woody Allen) 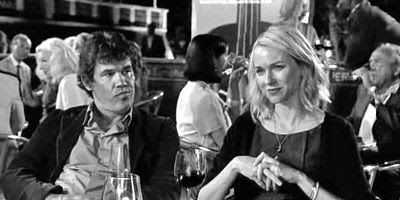 You Will Meet a Tall Dark Stranger is an unexpected surprise. Allen mixes a very black comedy with this light, almost absurd relationship comedy. But he never goes too dark.

I'm trying to think of a example but will undoubtedly fail to explain. Anthony Hopkins marries his call girl, played by Lucy Punch. Funny situation. This marriage ruins Hopkins. It's not quite a "just desserts" situation because Hopkins isn't a terrible guy. No one, with one exception, really gets a deserved comeuppance. Instead, they just navigate these incredibly frustrating, dumb situations they've put themselves in....

Allen almost loses it all at the end--he's using narration (from Zak Orth, who does a fine job) and it doesn't feel quite right--but then he saves it. This save is immediately following another scene where he could have perfectly ended the film. But the save is better.

Every single performance in Stranger is outstanding, but Naomi Watts and Josh Brolin can do these types of roles. It's Antonio Banderas who really surprised me. He's this perfect Woody Allen leading man (even though he's in a supporting role here). Seeing him bluster and think and speechless... it's just fantastic.

Gemma Jones is the other principal cast member (she's Hopkins's ex-wife, they're Watts's parents, she's married to Brolin). Allen treats her comically, until he establishes it's her world and everyone else is living in it.

I expected something decent, but Stranger's great.

Posted by Andrew Wickliffe at 7:00 AM No comments: